An estimated 650,000 Rohingya refugees have flooded into Bangladesh to flee an offensive by Myanmar’s military that the United Nations has called the world’s “fastest developing refugee emergency” and a “textbook example of ethnic cleansing.” Of those who have crossed the border – 60 percent are children, according to UNICEF.

There had already been some 200,000 Rohingya refugees living in the border village before September’s massive influx. In total, more than 850,000 refugees are now living in two sprawling camps across Cox’s Bazaar.

This sudden and massive surge of new arrivals is pushing humanitarian agencies to the brink and introducing another sort of crisis in the camps: A generation’s worth of children under 14 are living day to day without proper nourishment or education, and in extreme cases, with no family whatsoever.

Ahmer Khan is an independent documentary photographer and a radio journalist based in Indian-administered Kashmir focusing South Asia. He has done photo and video commissions for BBC, Al-Jazeera, The Guardian, Carnegie Council, Yale Journal, The Christian Science Monitor, Getty Images, Foreign Policy, Vice News, Grazia, BuzzFeed, The Diplomat, Huffington Post and many other publications. He is the correspondent for Radio France International (RFI) and The Christian Science Monitor covering south Asia. Follow him on Twitter & Instagram at @ahmermkhan. 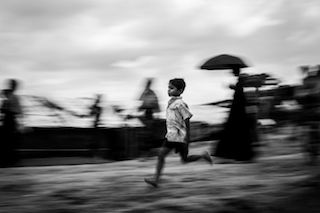