Naraha had a population of 8,000 before the magnitude 9 earthquake and tsunami triggered the triple meltdown and explosions at the nearby Fukushima No. 1 nuclear power plant in March 2011, spewing radiation over paddy fields and homes for miles around.

Four-and-a-half years later, the Japanese government decided the town had been cleaned up sufficiently for residents to return, even though radiation levels, while within permissible limits, were higher than elsewhere in Japan. The problem was, not many of them wanted to go back home, while others had already moved and settled elsewhere. Of the 100,000-plus residents evacuated from the nuclear disaster-affected region -- an area slightly bigger than the Auckland urban area --  only 12,859 have returned, many of them itinerant decontamination workers residing in abandoned homes.

In fact, Naraha had become so depopulated and lonely that residents decided to craft dolls out of old kimonos and any other scraps of materials they could lay their hands on. They then placed them around the town, in the post office, bank, library, even at the bus stop. Tokyo-based, award-winning British photographer and writer Rob Gilhooly, who was one of the first foreign journalists to report from the disaster zone in March 2011, visited Naraha to meet and photograph the town’s newest residents.

Rob Gilhooly is a U.K. born freelance photographer and writer who is currently based in Japan. His work has appeared in publications around the globe, including Newsweek, Time, the New York Times, International Herald Tribune, The Times, the Guardian, New Scientist and the Sydney Morning Herald.

Part of the suite of Fissure theme exhibitions. 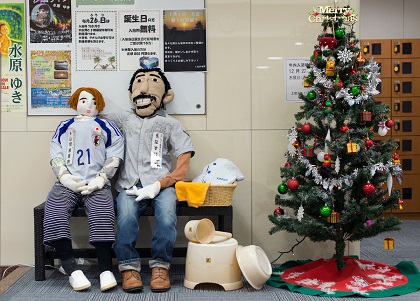